St Barnabas is part of the Diocese of

The Diocese of London covers 277 square miles of Greater London north of the Thames from Staines in the west to the Isle of Dogs in the east and as far north as Enfield. It comprises the Cities of London and and the boroughs of Brent, Harrow, Ealing, Hillingdon, Barnet, , , Haringey, Hackney, Islington, Tower Hamlets, Hounslow, Kensington & Chelsea, Hammersmith & Fulham and part of .

The Diocese of has:

The Church of England in also runs some 150 social responsibility projects incorporating work with children and young people, refugees, asylum seekers, the homeless, people with mental and physical disabilities, families and older people. There are also countless community-based activities such as Toddlers toddler groups, youth clubs, and Guides and Scouts brigades.

The Church of England is growing rapidly in the Diocese of London. Electoral rolls show that church membership in the Diocese has increased dramatically - from 45,000 in 1990 to 69,000 in 2006.

Our Diocese is presided over by the
Bishop of ; Rt Revd Richard Chartres 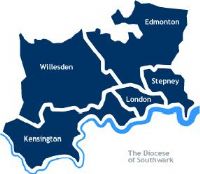 St Barnabas is part of the Willesden Episcopal Area

The Willesden Area is served by our Area Bishop
Rt. Rev’d Pete Broadbent,

Each Area also has an Archdeacon - Willesden Area is served by the
Archdeacon of Northolt, The Ven.

Parishes in our Area are grouped into 4 deaneries based on borough boundaries.
Our deaneries are Brent, Ealing, and Hillingdon

Each deanery is served by an Area Dean who supports the parishes in that deanery.
In the deanery of Ealing there are also 4 sub deans who assist the Area Dean.

Other pages in this section for you to take a look at:

What is the Church of England?